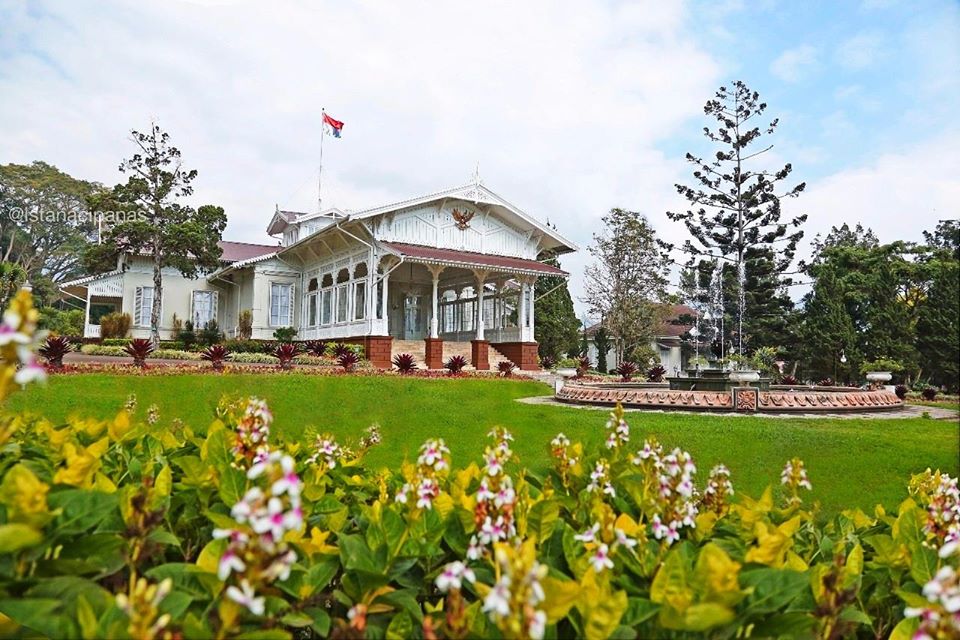 The architectural style of this palace is different from the others; characterized by traditional, made of wood and board, and does not seem pretentious. Besides being used as the Presidential Palace, Cipanas Palace is also opened to the public. Visitors can see the contents of the palace building and breathe the cool air in the palace courtyard area.

Cipanas Palace has a wide collection of paintings and historical objects of the country. This attraction is suitable for those who want to know more about Indonesian history from the perspective of the Presidents as residents of the Cipanas Palace.

The courtyard area and forest of Cipanas Palace have a diverse collection of plants, more than 1,300 specimens from 171 plant species. Of the many plants, there are 2 specimens growing in almost every corner of the palace courtyard: the Kigelia aethiopica Decne in Delles and Cinnamon Tree.

Cipanas Presidential Palace was founded in 1740 by Van Heots, a Dutch landowner. Cipanas area is famous for its hot springs, from which the name Cipanas originated. In the area of ​​Cipanas Palace a hot spring bathing facility containing sulfur was also built. Then, Cipanas Palace was made a resting place for the Governor-General of the Netherlands, because of the cool mountain air and clean nature.

During the Japanese occupation this building was a haven for Japanese authorities who traveled from Jakarta to Bandung. They stopped and rested to enjoy the cool air, the beauty of the security, and the warm water of the baths. After Indonesian independence, the building was designated as one of the Presidential Palace as a resting place for the President / Vice President and his family.

In this Cipanas Palace, precisely in the Main Building, Sukarno, married Hartini, who was a chaperone on his journey as President. Inside the Bentol Building there is a desk and chair facing the glass window, where President Soekarno was inspired by his speech. In 1965 in the Dining Room in the Main Building, the cabinet convened under the direction of the Minister of Finance, Frans Seda, set a change in the value of money from Rp1,000.00 to Rp1.00.

Cipanas Presidential Palace is usually not used to receive state guests. However, in 1971, Ratu Yuliana stopped at Cipanas Palace when visiting Indonesia.

This building is traditionally patterned with a tall front porch. The Main Building has undergone various renewals gradually. Restoration or renovation is always done to maintain the traditional architectural style and preserve nature.

There are various paintings in this building, one of them is "Jalan Seribu Pandang", from which direction the painting is viewed, the path in the painting is always changing, becoming in the direction of the eye's eye. There is also a painting about the pleasant smile of a beautiful woman by M. Thamdjidin (1965) in the Back Porch of the Main Building.

In each Pavilion there is a living room, bedroom, dressing room, and dining room. There are various paintings by domestic and foreign painters. The paintings on the walls have a theme of natural scenery, mountains, trees, or beautiful women.

The Bentol building does not have much furniture, there is a desk and chair in the front room. The work table faces a glass window with a beautiful view of Mount Gede.

There are two baths to accommodate hot springs that contain minerals. Other facilities are a small fountain in the front yard of the palace, the following flagpole in the middle, and a fishing pond.

Cipanas Palace is located on Jalan Raya Puncak, 103 kilometers from Jakarta. The palace complex is located in Cipanas Village, Pacet District, Cianjur Regency, at the foot of Mount Gede, West Java, at an altitude of 1,100 meters above sea level. The palace building stands on an area of ​​approximately 26 hectares, with a building area of ​​around 7,760 square meters.

Cipanas Palace is open to the public, but must register before visiting. There are no visit fees. For registration, please visit Istana Cipanas